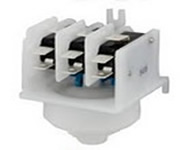 Jacuzzi Two Way Air Switches are used when there are more than one bellow button on the top of the Jacuzzi Shell. Air Switches are attached to the Bellow Buttons by means of 3 mm Air Pipes. One Switch activates one component.

Four Way Air Switches are used when there is only one Bellow Button on top of the Jacuzzi Shell. This one Air Switch can activate three different components by continuously pressing it till the desired component is on.

In some cases where there are more than one Bellow Button on the Jacuzzi, but the Air Pipe has somehow come loose from the Bellow Button and it cannot be fished out, we will then suggest to the customer to install a four way air switch to solve his problem of switching components on and off from within the Jacuzzi.

Flat Jacuzzi Air Buttons are intended for installations where the Pump System is not further than 5 meters from the actual Jacuzzi.

Jacuzzi Mushroom Bellows are by far the most popular type of bellow button. This button can effectively activate components up to 10 meters from the Jacuzzi.

Electronic Jacuzzi buttons work up to any distance, but are difficult to find due to most of the major Jacuzzi manufacturers closing down.